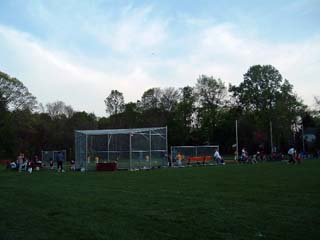 Nether Providence is home to a number of attractive parks that offer active recreational opportunities such as baseball, soccer, and basketball, as well as passive recreational activities including walking, bicycling, nature study, and picnicking.

Natural Lands and Anne Toole Consulting prepared a comprehensive plan for Nether Providence Township, Swarthmore Borough, Rose Valley Borough, and Rutledge Borough in which they evaluated the recreational facilities and provided recommendations and opportunities for these communities. This plan will serve as a guide for these communities as they review their recreational resources. To view the final report, please click this link: CORPOS Final Report

This park is located at the intersection of Bullens Lane and Westminster Drive.  The one-acre park contains a ballfield and one tennis court.

This 17-acre park, located behind the Wallingford Train Station at the intersection of Turner Road and Possum Hollow Road, was formerly known as the Duer Tract.  The land belonged to Dr. Horace H. Furness and his family.  It was acquired by the township in 1996 through a state grant to preserve it as open space. Recently the township applied for a grant from PECO Energy to fund development of a comprehensive plan to guide the park’s use in the years ahead.  Walking trails and other passive recreational activities are envisioned for the site.

Located on New Jersey Avenue in the Garden City section of the township, this four- acre park was established in 1963 and named in honor of Charles Hepford, a township commissioner from Pine Ridge.  It offers soccer & baseball fields, play equipment and a walking path.

Acquired by the township in 1996 through a state grant, this 45-acre park is named for Howard H. Houston, Chester’s former mayor and the man responsible for bringing trolleys to Nether Providence in the 1890s.

The park offers some of the finest soccer and baseball fields in the county as well as a new walking trail that meanders through a healthy, mature forest with numerous species of trees:  tulip trees, white oak, red oak, beech, maple, and ash.  Many of the trees are estimated to be more than 200 years old.  Wildlife that make use of the wooded section of the property include many species that are rarely seen in the area:  great blue herons, hawks, great horned owls, foxes, and wood ducks.  the park offers a diverse landscape of steep slope and valley surrounding Beatty Run, which flows into Ridley Creek at the property’s border. A groundbreaking for the park’s recreational fields was held on March 18, 2000, and the fields officially opened three years later. This major project was largely funded through local fundraising efforts of the Nether Providence Athletic Association (NPAA) Soccer and Baseball leagues, with help from the township as well as private donations from community members, families, and friends.

The fields are named the “Robert Urban Recreational Fields” in honor of Bob Urban, a Wallingford resident who was President of NPAA Soccer for thirty years and whose involvement in the soccer program spans 35 years.  Bob built a nationally recognized soccer program that was and still  is considered the best in the tri-state area.  Bob retired from the program in 2001.  Sadly he passed away on May 28, 2006

Located on Avondale Road adjacent to the historic Thomas Leiper House, this six-acre park along the Crum Creek is an inviting spot for a picnic.  Picnic tables and benches beckon under the shade of stately old trees.    Parking is available at the Leiper House parking lot.  Across the road, the Leiper House, the summer home of tobacco merchant and railroad pioneer Thomas Leiper, is open to visitors on Saturday and Sunday afternoons from 1-4 pm from April through December.  A small donation fee is requested.

Named in honor of Morris Sapovits, the longest-serving (1929-1954) commissioner in Nether Providence history, this four-acre park is located on Vernon and Anderson streets in South Media.  It was established on land donated to the township by the Key Realty Company.  The newly renovated park offers a ballfield, basketball courts, playground equipment, picnic tables, and grills. Owned by Delaware County, this park encompasses 141 acres and includes two ballfields, walking trails, and picnic tables.  It was established in 1937 and expanded over the years.  The park was named for Samuel Smedley, first chairman of the Delaware County Park Board, which was established in 1932.  The park entrance is located on Baltimore Pike about one-quarter of a mile east of Springfield Mall.  A 2.2 mile walking/biking trail, the Smedley-Leiper Trail, runs through the park, passing next to the Community Arts Center on Plush Mill Road, crossing Rogers Lane and Yale Avenue, and ending at the Leiper House on Avondale Road.

Located on 30 acres along Ridley Creek, the Arboretum is a sanctuary for plants and animals.  It also provides environmental education opportunities, as well as a peaceful setting where visitors can leisurely explore and enjoy  nature.  A 30-minute walking tour enables visitors to observe 12 significant trees in the Arboretum collection.  Visitors also can enjoy the Arboretum’s collections of rhododendrons, azaleas and perennials, as well as its natural rock outcrops and water features.  The Arboretum grounds are open daily from 9 am to 4 pm.  The Arboretum is closed on major holidays. Entrance to the Arboretum is at 10 Ridley Drive (off Chestnut Parkway) in Wallingford.

The Arboretum was established in 1931 by a Chester lawyer, Joshua C. Taylor, in memory of his wife, Anne Rulon Gray.  An early proponent of conservation, Taylor dedicated the Arboretum to promote the “health, enjoyment and education of the public in perpetuity.”  A trust fund provides for maintenance of the Arboretum.

This half-acre pocket park at Ronaldson and Allen Streets in South Media was officially established in 1979 as a memorial for those who served in World War I.  The tract was originally presented to the township in 1929 by prominent attorney and township resident A. B. Geary and his family.  It offers playground equipment.

Come join us for a walk or a bike ride on the Leiper-Smedley Trail. a six feet wide, paved, multi-use trail links the historic Leiper House and Park to Smedley Park; and allows access to Strath Haven High School and Middle School and the Community Arts Center. The trail, built during the Blue Route construction, is over two miles long and allows walkers, joggers and bike riders the opportunity to enjoy the Crum Creek Valley. Parking for those who wish to use the trail is available at the Leiper House, mid Avondale Road, and Smedley Park.